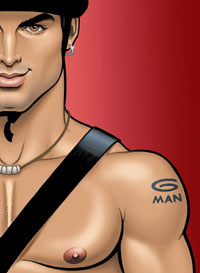 Do you remember the song "I'm Too Sexy" by bald brother duo Right Said Fred? This muscle-worship anthem would have been a fitting soundtrack for a new book by illustrator Glen Hanson. If you'd ever wonder if there is such a thing as being too sexy, have a look at Hanson's collection of sensual imagery of male beefcake bodies.

Hanson is a gifted illustrator, cartoonist and animator. The Canadian born has designed characters for animated TV shows such as "Beetlejuice," "Spy Groove" and MTV's "Daria."

Currently, Hanson is doing pre-production work on a new animation show for LOGO, the upcoming US lesbian and gay network. This new show will be based on his popular gay comic strip "Chelsea Boys" (a collaboration with Allan Neuwirth).

See an exclusive preview of Hanson's GMAN in this photo album (all images courtesy of Glen Hanson).