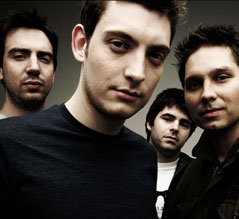 The British Mercury Prize is one of the most influential prizes in the British and Irish music industry. Unlike the American Grammy Awards, the Mercury Prize tends to favor unknown, independent gems that might not have had any commercial impact, but made an artistic mark.

Often the winners of the prize put their own spin on a traditional genre to create something that is original, ahead-of-the-curve and exciting to discover.

The winner of this year's prize will be announced on September 7th. Morrissey, Jamie Cullum, PJ Harvey and Grand National (my personal favorite) are conspicuously missing from the nomination list.

Belle & Sebastian - Dear Catastrophe Waitress(music link)
Based in Glasgow, Scotland, Belle & Sebastian make crisp pop-rock with a folky edge. One of the freshest new sounds of the year in my opinion. Produced by Trevor Horn (Seal).

Franz Ferdinand - Franz Ferdinand (music link)
You must have been living under a rock if you have not heard about Franz Ferdinand. The group is this summer's alt-rock sensation with single "Take Me Out." The big question is if these Scottish lads can live up to the hype. They're not the best candidate to win this award, but they likely will.

Jamelia - Thank You (music link)
Jamelia's "Superstar" appeared earlier this year at the "Queer Eye" soundtrack. The R&B singer is a refreshing alternative to the smoky alt-rock action on the shortlist. However, her sound is hardly innovative and winning this prize is a long shot.

Keane - Hopes and Fears (music link)
Keane's piano-driven rock is reminiscent of Coldplay's earlier work. Without guitars, the Sussex trio creates moving ballads that have already taken them to the top of the British album chart.

Snow Patrol - Final Straw (music link)
Snow Patrol is an Irish band based in Glasgow. Their sound is alternative pop-rock that is both crunchy as it is melodious. A serious contender for this prize and my personal favorite.

Joss Stone - The Soul Sessions (music link)
There is something odd about a white teenage singer pouring her heart out like Aretha Franklin. Perhaps Stone needs to wait a few more decades before receiving this coveted prize.

The Streets - A Grand Don't Come for Free (music link)
This concept album is getting a lot of buzz in the mainstream press. Rapper Mike Skinner fuses honest storytelling with humor and hard-pounding grooves.

Ty - Upwards (music link)
Born in London to Nigerian immigrants, rapper Ty has been recording since the mid-'90s. After Dizzee Rascal's Mercury win last year, the odds of another rapper winning this prize are against Ty.

Amy Winehouse - Frank (music link)
Winhouse's unorginal take on jazz and R&B will likely put you to sleep. Nonetheless, this debut of the 20 year-old singer was favored over more obvious jazz picks like Jamie Cullum's "Twentysomething."

Robert Wyatt - Cuckooland (music link)
This radical singer/songwriter has been making music since the mid-'60s. Wyatt's latest effort includes many guest musicians (including Brian Eno) and features more of his spirited songwriting.

The Zutons - Who Killed The Zutons (music link)
Newest band from the Liverpool music scene. The Zutons bring stylish rock to the masses. Reminiscent of Devo and the Talking Heads. This debut album was produced by Ian Broudie (Echo & The Bunnymen) and features the single "Pressure Point."

Who is your favorite?