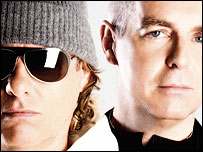 The Pet Shop Boys are nearing the age of 50 but the duo is not showing any signs of slowing down their creative endeavors. Neil Tennant and Chris Lowe will compose the soundtrack to the film "Battleship Potemkin." The 1925 movie will be shown at a free show in London's Trafalgar Square on September 12th (via DJ Martian).

Eisenstein's "Battleship Potemkin" has influenced many artists and film-makers over the years. The movie has widely been acknowledged as one of the masterpieces of twentieth century culture. The silent movie portrays the story of a mutiny aboard a Russian battleship amidst unbearable conditions in 1904.

Tennant and Lowe will unveil three new songs on the soundtrack. The Boys contacted German composer
Torsten Rasch to write orchestral arrangements that would fit their signature electronic sound. The instrumental tracks will be played live by the 26-piece Dresdner Sinfoniker.

"It's wonderful to be given the opportunity to write a complete soundtrack to this classic film and then to perform it as a free concert in the heart of London," said the Pet Shop Boys in a press statement. "The music is a combination of electronics and strings and, although mainly instrumental, includes three new songs."

The show is presented by the Institute of Contemporary Arts with art direction by Simon McBurney of Théâtre de la Complicité. The event is part of Trafalgar Square Summer 2004, a program of free events organized by Mayor Ken Livingstone.