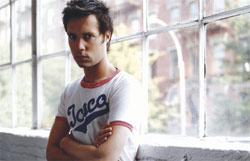 Rufus Wainwright, Jen Foster and American Idol's Jim Verraros were some of the big winners at the 2004 Out Music Awards, which was held last Saturday in New York. This event is not like any other award ceremony. Out Music is an organization that started a decade ago with the objective to raise the awareness about openly gay and lesbian artists and their music.

Out Music began when a group of musicians met in an East Village apartment to share music and experiences. In 2001, the professional organization introduced the first annual Out Music Awards to increase the popularity of gay and lesbian musicians.

The list of Out Music Award winners uncovers some of the obscure gay gems that are a welcome alternative to the stuff we already know and get to hear everyday. Hail to these artists for openly sharing their pride. Here is the full list of recipients:

Outstanding New Recording - Duo/Group
Girlyman "Remember Who I Am"

Outmusician of the Year
Alix Olson