Things You Will Not See on TV 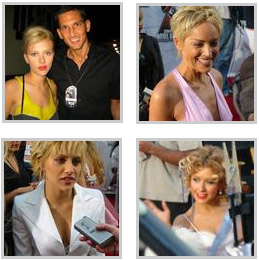 The best things at the MTV Movie Awards happen when the cameras are off. Whether it is seeing Jake Gyllenhaal chain-smoking, Paris Hilton parading up and down the Red Carpet or Matthew Perry getting pissed for not finding his limo, the event is full of backstage fuss that MTV is glad not to show you.

The network also censored a controversial mooning stunt by Eminem who showed his bare butt to the audience during a performance by D12. I couldn’t care less about the rapper’s ass, but it’s sad that MTV feels the need to censor the show. The MTV Movie Awards has built a reputation for its irreverent look at the movie industry and pop culture in general.

Here are some special awards for those that made a real impression at the event:

Best Lesbian Kiss: This year’s show had plenty of gay moments. Noteworthy was the smooch between Carmen Elektra and Paris Hilton. Elektra was one of the winners of the three-way kiss in “Starsky & Hutch.” When her two co-stars were missing in the audience, she invited presenters Snoop Dogg and Paris Hilton one by one to join her for a little action.

Best Media Chick: Paris Hilton. Hands-down. The first person to hit the Record Carpet was media darling Paris Hilton. The star of FOX’ upcoming “The Simple Life 2” skillfully paraded up and down the red carpet for almost two hours (!) to speak with reporters.

Best Performance: The Yeah Yeah Yeahs blew me away when they performed their hit "Maps" on an incredible set, a concept by director-producer Spike Jonze.

Best Blunder: MTV deserves the award for biggest blunder of the evening. Dozens of celebrities decided to skip the after-party at the studio lot. They were routed to a limo spot that just happened to be right outside of the media room.

I chatted with Jake Gyllenhaal who told me he doesn't mind playing a gay character in the upcoming "Brokeback Mountain" with Heath Ledger. Two asses we really care about (as opposed to Eminem's ass).

Best Red Carpet No-Show: Presenter Tom Cruise was conspicuously absent from the Red Carpet. I like to believe he wanted to avoid my big gay question. Although I could have had my chance with Vin Diesel. Gaydar was flaring.

Best Comedian: Interspersed throughout the show were a series of hilarious short films inspired by the upcoming Will Ferrell comedy "Anchorman" as Ron Burgendy.

Best of the Worst Dressed: Oops, she did it again. Christina Aguilera looked like a really bad imitation of Marilyn Monroe. The dress was clumsy and it made her trip when she came out on stage with Sharon Stone to present.

Best Comeback: Sharon Stone still plays the part. She appeared as a queen hen among all the celebrity chicken at the event. She made a courtesy stop at the Red Carpet to have their pictures taken. Stone told me that she was “so excited to be here, because this award show is so much fun.” How cliché.

Best Partisan Moment: Michael Moore appeared on screen by satellite link during the show. He pitched his controversial "Fahrenheit 911" flick, calling it "the best summer movie with lots of explosions."

Best Bodyguard: When I approached Christina Aquilera for some questions, her bodyguard stepped right in front of me to avoid any danger. Imagine a guy ten times the size of Christina and you'll understand I backed off for a moment (Christina was nice enough to chat a little while walking to her limo).

Best Craving: Scarlett Johansson couldn't stop sipping from her can of diet Pepsi during off-camera time. Compared to all the cravings out there this is a pretty tame one.