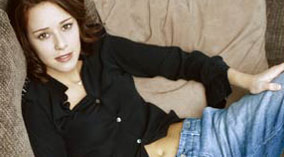 Welsh singer/songwriter Jem will embark on the first leg of her world tour this June with dates set across the U.S. Jem will perform songs from her debut album "Finally Woken" which blends a myriad of styles, beats and textures. Jem will head out on the road with band mates Pete McNeal (drums), Ross Grant (guitar), Ethan Phillips (bass) and Danny Chaimson (guitar/keyboards).

In addition, Jem just finished making her first music video with the acclaimed production duo "Honey" for her first single off the album "They," which is a tongue-in-cheek song about faceless figures whose suggestions and ideas seem to have influence on our lives. Honey is the acclaimed duo responsible for some of the most award winning visuals in recent years including the Matrix. The video was shot in Los Angeles over the Memorial Day weekend.

Full listing of tour dates and cities can be found on Jem's web site.