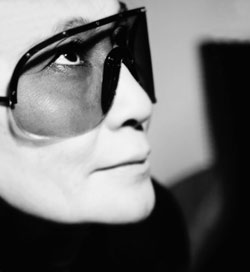 The success of the song in clubs around the country sets the stage for more to come. Ono plans to release a remake of "Every Man Has A Woman Who Loves Him" from the 1980 Lennon/Ono "Double Fantasy" album.

In typical Ono fashion, the song has become a bold statement that tackles the controversial same-sex marriage issue head on.

The pop culture legend re-recorded the vocals and included the lyrics "every woman has a woman who loves her" and "every man has a man who loves him."

In an EXCLUSIVE interview with Arjan, Ono speaks about her feelings of closeness to the gay community. "Their struggle is a human rights issue to me," she says. "I have suffered myself from racism and sexism all my life. I know what it feels like to be an outsider. I understand what position gays have been put in."

"A lot of people are testy and angry about the situation in the world and they’re trying to find a scapegoat," argues Ono. "The result is that people focus on things that really are not an issue, like civil rights for gays."

The remix EP has been pre-released on iTunes (music link) and features remixes from Basement Jaxx and Dave Aude. These pulsating remakes combine carefree dancefloor escapism with Ono’s powerful message about equality.