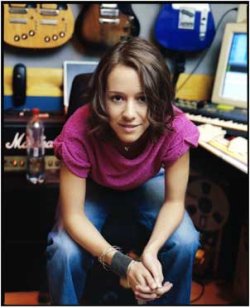 Jem couldn't believe her ears when she first heard Madonna's rendition of "Nothing Fails." The Welsh musician had co-written the song almost two years earlier with famed producer Guy Sigsworth, who then passed the track on to the Material Mom, "Nothing Fails" surfaced on Madonna's "American Life" album, and helped propel Jem into the international spotlight.

"I heard it for the first time in her manager's boardroom and I thought to myself 'this is the weirdest thing," Jem tells arjanwrites.comfrom her home in West London. "It was a surreal moment."

She recently released her debut album "Finally Woken" on Dave Matthew's ATO label. The record is a progressive mix of catchy pop, hip-hop and electronica. The singer’s distinct songwriting appears deceivingly simple, but has an emotional intensity that will likely appeal to many.

Songs such as "Just A Ride," "Finally Woken" and the single "They" all reflect Jem’s positive and pragmatic outlook on life.

Jem’s interest in music emerged when she worked as a DJ agent and party promoter in Brighton, England. In 1999, she wanted to give way to her own artistic ambitions and moved to London to collaborate with a number of writers/producers, including Guy Sigsworth. Some of her early demo tracks were played on the influential Los Angeles-based radio station KCRW that eventually sparked the interest of ATO Records.

Some might compare Jem to other British female vocalists such as Dido, Beth Orton and Portishead. Jem appreciates "the lovely comparison" but does not entirely agree. "The only thing we have in common is that we have a soft voice and that we are from the UK. Musically I don’t see many similarities."

Rightfully, Jem's music is more upbeat than Dido’s melancholic songwriting. "I am an eternal optimist, which doesn't mean I haven’t seen a lot of shit," the star smiles. "You just have to appreciate every second of your life.”"

She finds it hard to describe her music to people that are not familiar with her sound. "I guess it is a good thing that it is hard to describe. That means it is different," she says. "I suppose you can shelve it under popular music."

Given her background, it comes as no surprise that the singer takes a keen interest in hip-hop and dance music. "I usually prefer a backing with strong beats and baselines," she says. "I'd put my songs under pop because of my emphasis on melody and the consistent structure of the songs, which makes it quite hooky."

Jem worked with hip-hop producer Ge-ology (Mos Def, Talib Kweli) and producer Yoad Nevo to give her album an eclectic, hip flavor. "Yoad has a lot of crazy instruments on the wall in his studio," says the singer. "When we recorded a song we tried to figure out what it was calling for and then we just picked out an instrument from the wall that we added."

The singer recently decided the move to Los Angeles to prepare for a tour and many media appearances. She has great memories about Los Angeles, New York and Miami in particular.

"I've been to Miami twice and I remember getting drunk there," she laughs. "I’ve been there for the Winter Music Conference. I had a great time, but I probably haven’t experienced the proper Miami. When the conference takes over everybody is a bit mad."