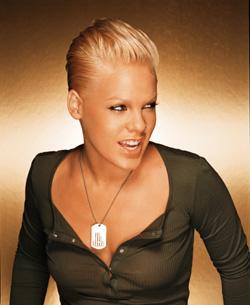 Pop-turned rock chick Pink released her third record "Try This" at the end of November. On the album singer makes another turn and introduces its listeners to a spunky punk vibe.

Pink, aka Alicia Moore, is steadily become a rainbow icon with both a growing queer and lesbian following. Not in the least for her unconventional way of thinking.

"I like licking people. But tongue action is also sexy, whether it's boys with boys, boys with girls, or girls with girls,” Pink told Avanova in September. “I believe there are no limits. And sex is fun, you know."

This carefree attitude is also reflected on “Try This.”

The singer collaborated once again with lesbian songwriter and producer Linda Perry, but also included Tim Armstrong of punk band Rancid behind the soundboards.

“Try This” is a departure from her lyrical catharsis on “Missundaztood.” After spilling her gut, the star decided to have some fun and experiment with edgier sounds.

The album kicks off with the poignant “Trouble,” which is the first single off the album.

The powerful “God Is A DJ,” easily sums up Pink’s creed when she sings, “You get what you’re given. It’s all how you use it.”

On “Last To Know,” the singer sheds her anger about a reluctant boyfriend. The track creates a fitting bridge to some of the punkier songs that follow.

The singer switches gears on the Armstrong-produced “Save My Life,” “Humble Neighborhoods,” and “Unwind” (an ode to rock diva Janis Joplin) that all pack a powerful punch and raise Pink to a new level of creativity.

Perry’s “Try Too Hard,” “Waiting For Love” and “Catch Me While I am Sleeping” prove that the two have found a durable chemistry that unites Perry’s skill with Pink’s spunk.

Pink demonstrates what can become of a young artist who is nurtured and allowed creative expression. Instead of being another flavor of the moment, Arista Records (and its president L.A. Reid in particular) gave the star the opportunity to find her voice and more importantly “the opportunity to fail,” as Pink writes in the album’s liner notes.

“Try This” is invigorating in style and substance and will easily pass for one of the most noteworthy releases of the year.