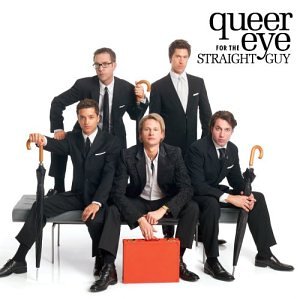 Capital Records has finally announced the official track listing for the "Queer Eye For The Straight Guy" soundtrack. This compilation, which will hit stores on February 10th, features a few interesting surprises such as the mash up of Fischerspooner and Billy Squier on "Everybody Wants You To Emerge" by gay superstar remixer Barry Harris (ex-Thunderpuss).

The disc will also include the Wayne Isham video of the Widelife smash.

1. "All Things" (Just Keep Getting Better) by Widelife with Simone Denny
2. "Good Luck" by Basement Jaxx f/Lisa Kekaula
3. "Slow" (Chemical Brothers mix) by Kylie Minogue
4. "Move Your Feet" by Junior Senior"Junior Senior
5. "You Promised Me (Tu Es Foutu)" by In-grid
6. "Superstar" by Jamelia
7. "Everybody Wants You To Emerge" (Barry Harris Revamp) by Fischerspooner vs. Billy Squier
8. "Sunrise" (Jason Nevins Remix) by Duran Duran
9. "Never Coming Home" (Gonna Live My Life Remix) by Sting
10. "An Area Big Enough To Do It In" by Prophet Omega
11. "Extraordinary" by Liz Phair
12. "Are You Ready For Love" by Elton John