« Dance Diva Is Back | Main | Musical Celebration of Diversity » 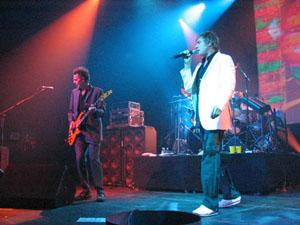 Style never goes out fashion must have been the thought of Duran Duran when they decided to reunite their original line-up for another album and extensive world tour. On Friday night, the band played a sold-out Tabernacle in Atlanta in front of a roaring crowd.

The ‘80s supergroup raised the bar for many other pop bands with their glamorous mix of synthetic pop-rock, chic fashion and exotic music videos. It is no wonder that there is plenty of pressure on these original fab five to prove fans they still have their sizzle more than 20 years after they topped the charts.

The group greeted the crowd when they hit the stage at 8:45pm with a funked up version of “Friend of Mine” from their 1981 self-titled debut album.

A parade of greatest hits followed including the seductive “Girls On Film,” “Wild Boys,” “Hungry Like The Wolf,” “Is There Something I Should Know” and the breezy “Save A Prayer.”

One of the evening's highpoints was a slamming performance of “Notorious,” which gave LeBon reason to compliment the audience with "You are loud!"

LeBon and pals continued to show strength in the mid-tempo ballads “Ordinary World” and “Come Undone.”

The show's no-frills set design enabled the music to take centerstage and spotlight the individual talents that make up the band. Taylor’s invigorating guitar riffs, Rhodes keyboard wizardry and LeBon’s sexual, charismatic showmanship proved that this group is still young at heart.

The band took the opportunity to try out a couple of new songs from their forthcoming album (due in 2004). The rocky “What Happens Tomorrow" and the melodic ballad "Beautiful Colors" indicate a slightly rawer musical direction emphasizing rock more than pop.

After a short break, Duran Duran hit the stage again to encore with “White Lines,” the edgy anthem from their “Thank You” album.

The group appeared to go on autopilot when performing “The Reflex,” the group’s biggest hit, which lacked some of the earlier excitement.

Duran Duran came back full force with an extended rendition of “Rio,” which included a playful snippet of Sisters Sledge’s “We Are Family” – a worthy ode to the fans of a band that has not lost its finesse to work up a party.

Photograph by Vesna Pahor and duranduan.com