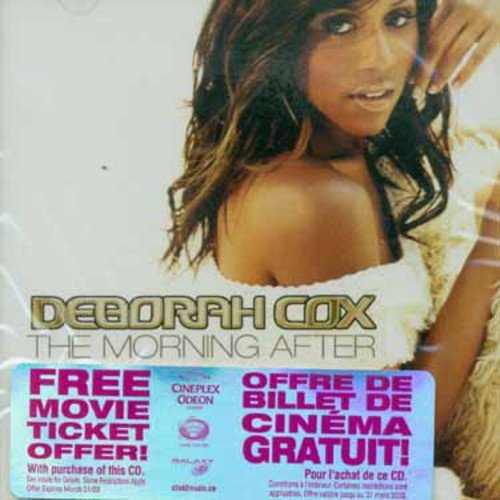 Her remixed smash hits "Absolutely Not" and "Nobody's Supposed To Be Here" were club sensations, but Deborah Cox proves on her new album that she is much more than just a powerhouse vocalist.

On "The Morning After," Cox shows off a sexy, soulful R&B sound that might pleasantly surprise her huge dance following.

Like Whitney Houston and Alicia Keys, Cox was discovered and mentored by music mogul Clive Davis. The Canadian-born singer built a strong R&B reputation after the release of her 1995 self-titled debut album, which included the charted hits "Sentimental" and "Who Do U Love."

With the 1998 release of the ballad "Nobody's Supposed To Be Here," her career began to skyrocket. The single sold more than one million copies, reached number two on the Billboard Hot 100 chart and spent 14 record-breaking weeks atop the R&B charts while a dance mix of the cut (by Hex Hector) became a club classic.

On "The Morning After" the singer works with an impressive bunch of R&B producers, such as Jimmy Jam and Terry Lewis, Shep Crawford and Jermaine Dupri. The collaboration has led to a mix of both upbeat dance-flavored grooves and laidback acoustic-flavored ballads. Cox co-wrote most of the songs, including the pristine "Hurt So Much" and the hip-hop-infused "Up & Down."

In an interview with Arjan, Deborah Cox expresses excitement about her popularity among gay listeners.

"The admiration and loyalty from my gay fans is amazing," Cox said. "I am not sure why the gay community is connecting with me so much. I am not gay, and I don't know what it is. I am very surprised by it. Gays love glamorous singers and big voices. I guess I am one of those big voices.

"I don't mind being known by gays just for my dance remixes," Cox continues. "I am very serious about their production and adamant about re-singing the vocals, for example, to make sure the song will sound great on the dance floor."

Despite the popularity of Cox's dance remixes, she noted that most of her fans know her from her R&B songs. "My ballads get played on more radio stations than my club mixes," Cox says. "In fact, my urban audiences are surprised to hear about the dance remixes."

In 2000, Cox toured with Lilith Fair. "It was a great opportunity to be in front of a completely different audience," she says. "I have the feeling I won over a couple of new fans Ñ people that would have otherwise never known me. It is such a misconception that certain audiences only appreciate a certain type of music. It really was a nice mixture of women just doing their thing."

She also expresses enthusiasm for performing live in gay clubs.

"Performing at gay clubs is really over the top," says Cox, who delighted fans in her recent tour. "The reaction to me performing live is something that really puts gays into a frenzy. I love to sing live, so the audience gets the pure vocal energy and on top of that my passion for performing. Gays are so appreciative that I put on a decent show."

"It is really great, even though I am still getting used to being up at 5 in the morning," she quips.