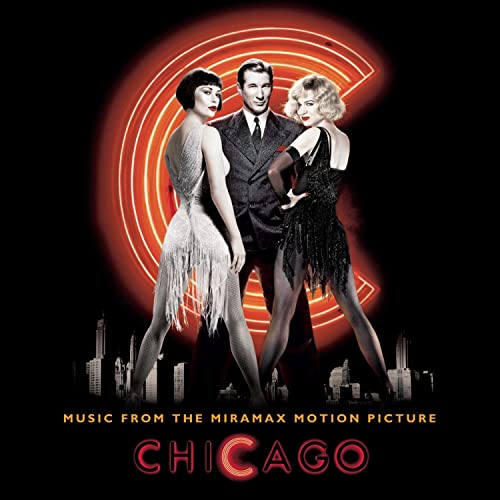 After the success of "Moulin Rouge," Hollywood was itching to bring more music to the big screen. "Chicago," one of Broadway's biggest hits, written and composed by John Kander and Fred Ebb, was artfully turned into a live-action musical by director/choreographer Rob Marshall and includes a star-studded cast with Catherine Zeta-Jones, Renee Zellweger and Richard Gere.

The soundtrack, which features 18 songs of high-voltage pizzazz, takes listeners right back to the original movie experience. A well-crafted score never replaces the full theater experience, but can offer both movie fans and music lovers something worthwhile that stands on its own.

"Chicago - The Soundtrack" includes some of the flick's grand tunes, such as the sexy "All That Jazz," the brassy "Razzle Dazzle" and the sassy "Cell Block Tango," performed by the film's real surprise, Queen Latifah.

The film was honored at the Golden Globes ceremony in January with a best picture award in the musical/comedy category, and best actress and actor (Renee Zellweger and Richard Gere).

Set in America's roaring 1920s, the musical tells the story of Velma Kelly (Zeta-Jones) and Roxie Hart (Zellweger). Both enjoy fame after they commit murder and purposely become the center of a media frenzy.

Flamboyant attorney Bill Flynn (Gere) defends the temptresses in his own quest for attention and celebrity. Velma and Roxie's vanity quickly turns against them after they vanish from the headlines and become yesterday's news.

The soundtrack's original musical tunes vividly portray the infectious exuberance of the 1920s with up-tempo sax-infused jazz tunes and sleek and sexy vocal arrangements. This music is made for toe-tapping.

Most of the tracks on the album are taken straight from the original Broadway production. There are additional songs by Queen Latifah, pop singer Anastacia and composer Danny Elfman ("Good Will Hunting," "Spiderman"). He contributes two songs, "After Midnight" and "Roxie's Suite."

Zeta-Jones, who started her career as a singer in London's West End, shines on Kander and Ebb's timeless masterpiece, "All That Jazz," with her very capable vocal power.

"Isn't it grand, isn't it swell," insists Renee Zellweger as Roxie Hart on the tender "Nowadays." The sweet songbird solo becomes a true highlight when it evolves into a sparkling revue duet with Zeta-Jones.

Zellweger is high on cuteness but low on vocal strength. In songs such as "Roxie" and "I Move On," the actress is often overpowered by the orchestral bombast. Equally unconvincing as a singer is Gere, who often mumbles his way through songs.

Queen Latifah adds a 21st century twist to the soundtrack with a flavorful hip-hop version of "Cell Block Tango" that also includes Macy Gray and rapper Lil' Kim. Anastacia's "Love Is A Crime" is an unsatisfactory track that seems pointless, showcasing the singer's big voice while holding onto a lifeless musical arrangement.

Slightly obscured by all the star quality on this record are the excellent performances by Christine Baranski and John C. Reilly. Baranski plays gossip reporter Mary Sunshine and is more than assuring on "We Both Reached for the Gun." As the excessively loyal husband of Roxie Hart, actor Reilly shows heart on the emotion-filled "Mister Cellophane."

Even though a soundtrack can never be a substitute for a movie, the original score to "Chicago" stands on its own just fine. But unless the listener is a fan of post-war era jazz or a hardcore Gere groupie, this is mostly just a pleasant souvenir for movie audiences.