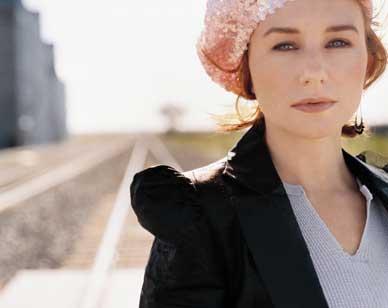 Her newest album, “Scarlet’s Walk,” is no different. With more than 74 minutes of music, the record is an inspiring cross-country travelogue that includes both personal stories and flaming social pamphlets. Troubled by a growing social hypocrisy, misuse of political power and glamorization of violence, Amos lights her torch in a search for true American values.

Her public soul-searching, told through the eyes of her alter ego, Scarlet, takes listeners from the dehumanizing, pseudo-glamour world of Hollywood (“Amber Waves”) to her spiritual Cherokee ancestry (“Wampum Prayer”), and from white collar homophobia (“Pancake”) to the personal tale of a friend dying of AIDS (“Taxi Ride”).

A reluctant highlight of the album is "I Can’t See New York," in which the singer tries to come to grips with the panic and chaos of 9/11.

Amos is clearly disturbed by recent political events, and by the direction taken by the current occupant of the White House. She expressed some of her frustrations in a recent interview with the Washington Blade.

“If we’re saying that we are an example of democracy and an example of freedom," Amos says, "then I think that we have to truly look at how our leaders are representing our country to the world right now.

“There seems to be an opportunity for a whole generation to become pro-active by doing research and starting to question what they are being told," says the soft-spoken singer, who started her career at a Washington, D.C., piano bar. "In 1968, a whole generation shifted the course of things because of their power. I don’t know what it is going to take for those torches to be lit again across the universities in America.

“I truly feel that the world where all decisions are being made is alienating us more and more from the countries that believe in democracy,” she says with a sigh.

She looks up and says in disbelief, “There were people in our government last year who basically said that if people question anything then they are betraying America. I found that offensive. That is not what a democracy is. I understand that sometimes strength is dominance and you have to fight. But you cannot use a terrible tragedy as a vehicle to push a personal agenda. That is what my worry is right now.”

In the song “Pancake,” the North Carolina native takes another stand and claims, “it is in vogue to be a misogynist homophobe.”

Amos nods and explains: “This song is really about the misuse of power. I see that a lot of leaders and artists in powerful positions either have malice against gay people and women or have a need to dominate them.”

“It might be a backlash," she says. "The fact that a lot of men and women, straight or gay, are very competitive and usually do a very good job might
be threatening.

“In a way, the heterosexual male is having a difficult time right now. Think about it for a minute. If you have been taught as a man to be a provider and you cannot provide on a material level, you might feel emasculated, and when you feel emasculated you might have to do something that makes you feel strong. Sometimes some people think strength is dominance.”

Amos, who now resides in Cornwall, England, with her husband, Mark Hawley, and their daughter, Natasha Lorien, has always been a fervent supporter of civil rights. She sees increasing white-collar homophobia gripping America.

“It is really shocking to me that a lot of people who run for office, all across the board, made comments that indicated that they look at gay people as a pejorative, as a negative. I felt like we have gone back in time. I thought that we were more open-minded, more accepting in the West. I don’t know what happened for the gay-bashing to be so obvious in popular culture.

"Taxi Ride" tells the personal tale of Kevyn Aucoin, the famous gay makeup artist to the stars who was also a close friend of Amos. He died of AIDS earlier this year, and the song describes how people betrayed him after they became aware with his illness.

“He was a very powerful force. When he needed people, quite a few people turned their backs," says Amos. "It hurt him very deeply. He was beginning to see who his real friends were and who were not. When he could do something for them, they were there. But when he could not do anything for them, they were not there. They could justify it any way that wanted. He is dead now.

"In 'Taxi Ride,' I explore what it is like when somebody dies and what it brings up in people. It has brought up a lot in me. I even questioned if I had been a good friend.”

Amos smiles, “You must think that I am a pessimist. The thing is that a lot of people think that I live in this fantasy world. I just believe in a magical way of thinking. Magic is in reality. Really.”