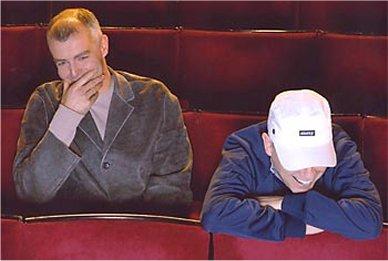 When the Pet Shop Boys sang "Being Boring" on their ’90s album "Behavior," they were obviously not referring to themselves. For more than 15 years, the uncontested kings of "Brit Pop" have captured listeners with unconventional music that elegantly favors both style and substance, and is packed with a heavy dose of lyrical wit.

Pet Shop Boys’ Neil Tennant, 47, and Chris Lowe, 42, have once again chosen a new direction for their latest album, "Release" (Sanctuary Records, 2002). At the core of the album are Tennant's autobiographical lyrics. He has previously proven that he is a true pop poet who has a knack for making even words like "equilibrium" and "long-haul" sound phonetically pleasing.

On the album, he intimately shares his emotions about a long-distance relationship ("Home and Dry," "Email") that eventually led to a difficult break-up ("Love is A Catastrophe").

The singer-songwriter also dives into larger, political issues, such as homophobia ("The Night I Fell In Love") and racism ("Birthday Boy").

The boys have started a nationwide tour in support of the new album. Arjan caught up with the Pet Shop Boys early last week to talk about their new sound, relationships, homophobia and a kinder America.

NEIL: Most definitely. It is a release musically in terms of its new sound and style. It is not fundamentally based on dance music this time. I think it has resulted in a beautiful quality that primarily focuses on melodies and lyrics.

ARJAN: Was there a certain musical influence or inspiration for this album?

NEIL: We tried to make this album without any influences. In fact, we recorded it at my house in the north of England, in the countryside, away from any city scene. We weren’t trying to do something hip or the latest thing. Chris and I just wanted to do a record we could feel really good about.

ARJAN: This more introspective approach is definitely a big departure from your previous album, "Nightlife."

NEIL: "Nightlife" is probably the most produced album we have ever done, collaborating with different producers. On this new album we all wanted to do it ourselves, which has resulted in a more pure kind of Pet Shop Boys.

ARJAN: You have said in previous interviews that rock and pop are two distinct styles. Are you trying to cross over by using guitars as a key element on "Release"?

NEIL: I still believe that. The thing is that we use guitars as electronic instruments and not like heavy rock bands use them. This is still a Pet Shop Boys album!

ARJAN: What approach did you take when you wrote the lyrics for the album?

NEIL: In general, when I write lyrics I always try to confront the good and the bad side of life. It is not all written with a romantic glow. I try to write away from clichés. So many pop songs nowadays are just clichés, really. I try to get away from that and confront the truth, which is good and bad. I think that reality is reflected on the album.

ARJAN: "Release" sounds very autobiographical. Was this album an emotional release as well?

NEIL: Very much so.

ARJAN: Would you mind sharing a bit?

NEIL: Not at all. I was going through a relationship that wasn’t working out. I was dating somebody who doesn’t live in England and it was a rather difficult time for me.

NEIL: That song is about me examining myself. You can fall in love spontaneously, but when you decide to pursue someone, you make a rational choice to do so. You put yourself in that situation.

ARJAN: Is this a bitter reaction to your break-up?

NEIL: No. That experience hasn’t left me bitter, or even jaded. It is really about getting older. We wrote a song years ago that was called "Love Comes Quickly" and it had the phrase, "Whatever you do, you can’t stop falling."

This new song is sort of the opposite of that. When you get older, the way you deal with love changes. There always comes a moment that you decide to throw yourself into it, and that is a moment that you choose. It is just as years go by you learn and you move forward from that.

ARJAN: "The Night I Fell in Love" is about a gay teen that meets a famous rap artist backstage and spends the night with him. How did you get the idea for this song?

NEIL: There is so much ugliness surrounding the homophobic issue in rap music. I just wanted to write a song that was just really sweet and sort of warm. I was imagining a story where the boy goes to a concert in Manchester and meets this rap star who is known as homophobic, and he ends up sleeping with him. I just thought it was a funny idea, and also a really sweet idea.

ARJAN: Were you trying to create a contrast?

NEIL: Yes, exactly: the sort of ugly "homophobic-speak" versus the naive innocence of a teen adoration.

ARJAN: Were you trying to respond to Eminem’s homophobic lyrics in particular?

NEIL: Eminem’s defense of the homophobic lyrics on his albums has always been that he’s not speaking as himself, he’s speaking as a character, and he’s representing homophobia in America. I thought it would be quite interesting to take that method and present rap in a homosexual context.

ARJAN: Were you trying to dis’ Eminem?

NEIL: Not at all. I think Eminem is brilliant. He is not homophobic. He is representing the ugliness and homophobia in America. He definitely plays characters. I do that as well on this song and present the whole issue in a different way.

ARJAN: This Saturday, you will be playing Nation as part of your U.S. tour. What can people expect?

NEIL: In this tour, it will be the first time we present the Pet Shop Boys as musicians. Before we were always very interested in combining music and theater. That has pretty much been in all of our live shows. We have also chosen smaller venues to create a more personal setting with the audience.

ARJAN: Are you looking forward to coming back to Washington?

NEIL: Very much so. It is a great city. Actually, it is good to be back in America. We haven’t been back here for almost two years.

ARJAN: Has it changed? Does it feel different in the wake of last year’s terror events?

NEIL: Yes, you can feel it. It feels like there is a greater solidarity between people. Especially New York City feels kinder to me. I will never forget that awful day of last September. We were in the studio recording the percussion for "Release" in London and I was outside the studio on my mobile talking to the producer of our musical, "Closer To Heaven." I went back in the studio, and people were watching the television, and I saw the events unfold. I was afraid London would be attacked as well.

ARJAN: That must have been a strange feeling.

NEIL: Very strange, indeed. After watching the television for five hours or so, I walked home past Buckingham Palace. There were tourists taking pictures of each other, and it seemed really weird that normal life was going on. It was very surreal, obscene maybe.

(Editorial Note: Arjan's interview with the Pet Shop Boys first appeared as a feature in the Washington Blade on May 17, 2002)